“The Radical Independence strategy of targeting the disillusioned and disenfranchised is being shown to be successful as we begin to collate our canvass data, finding large Yes majorites in working-class communities across the country.”  Duncan McCabe looks at how the referendum campaign has begun to re-engage an apathetic population with the political process.

Apathy is often cited as the reason for increasingly low voter turnout in elections for all levels of government. That there is apathy cannot be denied, but the biggest factor has to be a deep-seated disillussionment with the political process and its inability to deliver for ordinary people. The old anarchist truism that ‘Whoever you vote for, the government always get in’ aptly describes the working class experience, at least since 1979 and the election of Margaret Thatchers radical right regime followed by Labour governments happy to continue creating a de-regulated business environment for bankers and multi-nationals while the inequality gap grew ever wider. Expenses scandals following the financial crash were the last straw for many people.

When people feel constrained by forces beyond their control they stop finding reasons to participate in society beyond a personal, needs-based interaction. Hope of progressive change, common still in my parents generation, had been all but obliterated from working-class horizons.

Then came the referendum: The neverendum as it is described by some on the left as they impatiently wait for a return to ‘real politics’, ie the politics of failure, following a No vote. At first it was true that there was no real surge of interest in the population at large, but then something changed. I can’t be sure when it happened but at some point in the last couple of months people seemed to have raised their heads and begun, many for the first time, to see light at the end of the tunnel. 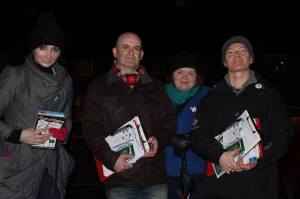 A realisation that this referendum is not about electing some politician or other but is about bringing real change to peoples’ lives has awakened an interest long thought dead. When I started knocking on doors a few months ago, a common response was “Ah’m no interested, winna mak any difference”. I still hear this refrain now and again, but the main problem with canvassing in the last few weeks has been trying to get away from doorsteps as people discuss the big issues of independence as well as their own specific, and sometimes personal, concerns.

The Radical Independence strategy of targeting the disillusioned and disenfranchised is being shown to be successful as we begin to collate our canvass data, finding large Yes majorites in working-class communities across the country. The concentration of effort on areas of low-voter turnout and high deprivation, such as next week’s mass canvass in Easterhouse, is not just enaging people with the referendum and independence, but with wider and more radical progressive visions, and importantly with democracy itself. Far from not being ‘real politics’, the independence referendum is putting everything back on the agenda and once people see the real political, social and economic opportunities a Yes vote can bring, then hope trumps fear almost every time.

Our positive canvass data to date should not be taken to mean that victory is assured. It most certainly is not and there are large numbers of undecided voters that we need to speak to and convince of the benefits of independence. It does show however that positive one to one engagement with people brings results and is an approach which allows our campaign to operate beneath the radar of the largely unsympathetic media and counter Better Together’s fearmongering.

Canvassing is not just about winning a Yes vote. If we are to actually build the fairer, more equal society that RIC certainly wants but which is also now such a big part of the Yes campaign, we need a clued-up and switched-on population. Changing Scotland for the better is just too important to be left to the politicians in Holyrood, and an engaged and empowered people will be the greatest asset our country could have. Let’s get out and speak to them and let’s transform Scotland together.

1 Response to Engagement and Empowerment